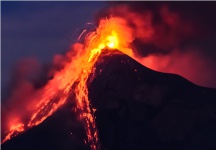 How old are rocks?

Radiometric rock dating techniques attempt to measure the age of rocks.
There are many different methods of analysis: Uranium-Lead (U/Pb), Potassium-Argon (K/Ar) etc.
They measure the present day amount of uranium (U) and lead (Pb) in a small sample of the rock.
The 'half-life' rate of decay of uranium into lead, is known.
An assumption is then made, about how much uranium (& lead) was in the rock when it originally formed.
The difference (original - now) is used to calculate the age of the rock, using the 'half-life' rate of decay.


Mt Ngauruhoe (New Zealand) experienceed lava flows in February 1949, June 1954, July 1954 & February 1975.
Rock samples were taken from each of the lava formations, and sent to a USA certified laboratory for radiometric dating analysis.
Their results gave rock ages ranging from 270,000 years old to 3.5 million years old - for rocks that formed less than 100 years ago.

They analyse a rock sample, and if it gives the 'wrong' age, they just discard that result.
They repeat the analysis with another sample from the same rock, until they get the answer they want.
Or they keep adjusting their assumptions, and repeat the analysis.

A standard question they generally ask (when you take a rock to be measured) is: "What age are you expecting?"
I.e. We will test the rock (and apply our assumptions) until we obtain an answer that fits your "assumption," because we're just guessing too.

They use rocks to date fossils, and fossils to date rocks - circular logic.

Answer: Nobody knows how old rocks are.