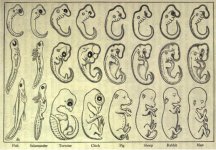 Ernst Haeckel: (German biologist 1834-1919) published drawings (1868) of the very early stages of embryo development for different species.
Haeckel's aim, was to "prove" that different species all had the same common ancestor (fish) - i.e. evolution must be true.
Haeckel's drawings were exposed as fraudulent more than 100 years ago.
Science textbooks continue to publish them, even today. Why?

The 2012 NSW (Australia) HSC biology exam, had a question on Haeckel's drawings.

Maybe someone should advise the NSW department of Education, that Haeckel's drawings were proven fraudulent more than 100 years ago.
Why does the NSW government deliberately lie to students? 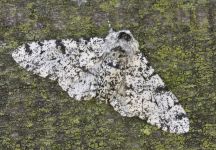 The Peppered Moth: As pollution levels increased (UK) in the 1950s, tree trunks became darker, so the darker coloured moths thrived, whereas the lighter coloured moths (easier to spot) were eaten by predators.
Bernard Kettlewell proudly proclaimed it, "The most striking evolutionary change ever witnessed in an organism."
Photos were published in textbooks as "proof" that evolution was true - and happening before our very eyes.

Eventually, it was admitted that the whole thing had been staged. Dead moths had been glued to tree trunks before being photographed, as the moths are nocturnal and rest in tree canopies. 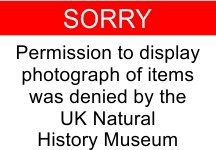 Piltdown Man: Fraud used to "prove" evolution.
In 1912 at Sussex, England, skull fragments were found with an ape-like jawbone nearby.
The discovery was announced (with great enthusiasm) as a Missing Link between apes and humans.
The fraud survived for more than 40 years, until closer investigation in 1953 uncovered the truth.
They didn't find any skeleton bones.
They didn't find a complete skull - just 5 cranium pieces (less than 30% of a complete skull).
They also found part of a jawbone, and one tooth - 7 pieces in total.
The lower jawbone didn't even fit the skull pieces.
Not able to display a photo of the 5 cranium items found.
Please enquire with the UK Natural History Museum: www.nhmimages.com  (The 5 cranium pieces are currently displayed on their website - photo:11217.)  &nbspMore information: www.nhm.ac.uk
How could they "prove" a Missing Link, from just 7 small bits?
The skull pieces had been deliberately stained to make them look "old."

Q1: If evolution is true, why is false data deliberately used to support it?


Is truth important to you?